Oak Tree Valley
This is a history of the display's location and how it's become the way it is today! It's gone through several changes as our lives changed, and we tried to work out a way to make it look the best we could make it :) Click here (or above on Our Display), to see the current display!

Trying the display downstairs, which we were changing over for more than just Sylvanians

Late 2011
We had a builder and architect, and all the other important things done like permits etc. The plan was to change it into 2 big rooms. One for pc's/collections on the left, and the other on the right for a family room (Tv, couch, some nice cabinets, door to outside etc). With also a hallway to make the 2 areas blend & lead down to the storage room, and a small room inbetween to have our Freezer / Tools / Everyday stock stuff in. ​
​​To do all this we had to have a big container and store all the important things in, and keep the already-arrived flat-packs and furniture (shelving for the family room, couch, chairs, tv unit etc) in.
Construction started in late September 2011. Everything went fine :) We had a few contingencies but thats expected in a project this big. Nothing horrible, just had to replace the water heater and it cost a lil more to box in the beams rather than having them exposed. Stuff like that :) I took a lot of photos as it went along, for memories mostly, but also just incase ;D

As the walls started going up it was looking great :D Was so nice to see the shape of everything coming together! :D 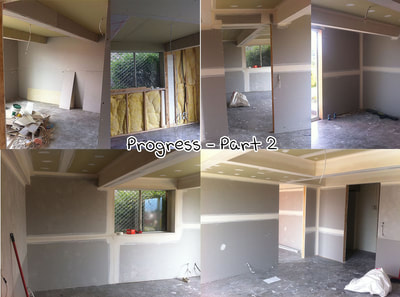 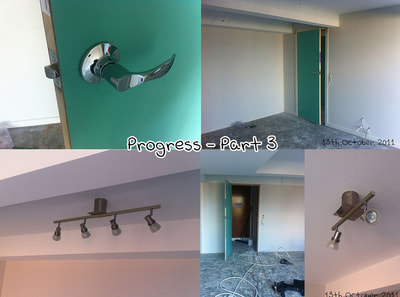 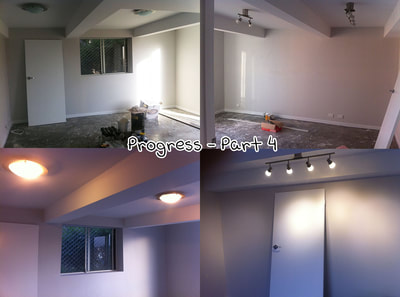 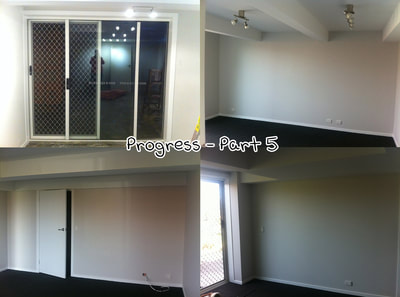 After construction had finished

End of October 2011
The Sylvanian display was upstairs still, as we moved things around. It was still a bit crowded though. That stayed there for quite a few months. I had moved it to a different wall, to try to see if it worked any better, but nope, still wasn't happy where it was. It was more awkward like that. We had the same sort-of layout (as the first photo), but it wasn't get as much light as we knew it could have. That's when we decided, downstairs it goes :D It would have a long wall to go on, so spreading it out would be a lot easier. Also with the new movable spotlights down there, it'd get great light and better photos.

Without that load of cabinets in the way of the door and being cluttered, it could become more of a spare room for Mum and I. She wanted a small office, and I wanted to be able to hangout in there with her sometimes.
These 2 images above show what the room downstairs looked like before we moved the Sylvanian cabinets down here. I still have these collections/shelving, they're just past that door you see on the far right, in the family room. They still get good enough light in there for anime figures. Sylvanian's needed the best they can get as they're tiny and have more details to them.
​

And we move it once again!

June 2012
​Middle of June 2012, and we moved the units downstairs to where the anime figures were. I put the glass units over into the family room, which left a big gap on the wall :) It looks more sophisticated in there rather then in the pc room.
June 2012, and 1 year later in June 2013. A lot has happened since we started the Sylvanian display, so a lot of the time it was put off. Never out of boredom or dislike ever. Just real life stuff got in the way :(

Between early 2014 and mid 2017, the collection remained mostly the same. We had a lot of real life health scares, both Mum and myself. She's ok now, and I'm a lot better. We went through a lot, and a lot of the time we just didn't have the energy to be able to sit and muck around with Sylvanians. We wanted to so badly. I kept getting the new things as much as I could, but they've stayed boxed up. I didn't want to lose any little things or for anything to get dusty. Luckily where we live, we don't get much dust, so don't worry, everything is still in its new condition (or however we received some of the older items)

And now we've got a lot better health and all the roller-coaster stuff that comes with big life changes, we can get back to it! We're so sorry for just disappearing all that time, and having no updates. I hope you can understand :)
We managed to get a new name for our site, Oak Tree Valley. We had previously been Sylvanian Town, but then Epoch released the town series, so between that and our own "restart" as such, we wanted to rename our town (it wasn't a small village anymore haha).
We had collected a lot over the years since 2009. We wanted for it all to have a spot, not have to put it away. We had talked a fair bit about it, and wanted to display everything, rather than having to put the beloved homes/shops away as we didn't have the room downstairs. It was sorta shoved to one end of the PC room (where my husbands pc is, and other collectibles on the shelves). Now it did look like a lot of room in photos, but the way I had tried to display it (by using white square tables in front to be a sidewalk type area) it was sorta inaccessible. I couldn't walk up to the shelves. I would have had to move the tables out or reach over them quite a fair bit to get into the shelves. Would have been terrible if things had fallen over and I wanted to save them or put them back up!

The spare room had been used as a "put random stuff here room". As we all have that one spot! Mum wasn't using the office as much through the past few years (due to life), but still wanted the PC. We moved the desk into the family room, so it can be used whenever. I had used the spare room for a while for my clothes (more fashion than ordinary day stuff), and anything that was girly and cute. But as I got better, I never went in there enough to take a whole room for it, especially when something was needing it more.

​The whole collection got moved upstairs once again to the spare room :) ​As things had changed a bit, we moved the shelving once more. We tidied it up, cleaned it all out. We started fresh, with only a few things to start off. The mini couch remained. The shelving we had came, and we added a few skinny ones stacked up aswell. A glass cabinet aswell, as we had precious collectibles we wanted to keep safe and light up! Specially things like mugs, special ed figures etc.
>>>> Continue on the Current Display page!